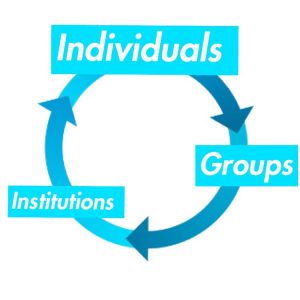 Groups vary in their sizes and formalities, as well as in the levels of attachment between group members, among other things. Within a large group, smaller groups may exist, and each group may behave differently.

At a music concert, for example, some may enjoy singing along, others prefer to sit and observe, while still others may join in a mosh pit or try crowd surfing. Why do we feel and act differently in different types of social situations? Why might people of a single group exhibit different behaviors in the same situation? Why might people acting similarly not feel connected to others exhibiting the same behavior? These are some of the many questions sociologists ask as they study people and societies.

Institutions are social structures in society. These structures help organize society as a whole. Each of these structures provides a function, often create conflict, and create and challenge meaning for members within the institutions and beyond. How do we know a structure is an institution? It needs to have a structure that is apparent to both members and non-members. This structure contains three elements:

Of course, there are many other institutions that sociologists study, but looking across the ‘life’ of sociology as a discipline, these institutions tend to remain the most common focus of study.

Sociologists can address the interconnections between individuals, groups, and institutions on a micro  or a macro  scale. Some research includes both. Working from the micro-level entails studying small groups and individual interactions in a particular time and place with a specific culture. The macro level analysis look at trends among and between large groups and institutions on the national and/or global scale. For example, a micro-level study might look at the accepted rules of conversation in various groups such as among suburban teenagers in New England or business professionals in the tech industry in Silicon Valley. In contrast, a macro-level analysis might research the ways that language use has changed over time or in social media outlets around the globe.

the systematic study of society and social interaction with attention to the interconnection between individuals, groups, and institutions

Rothschild's Introduction to Sociology by Teal Rothschild is licensed under a Creative Commons Attribution 4.0 International License, except where otherwise noted.