I know what you’re thinking – didn’t we do this back in Chapter 5? Well, not really. The law of gravity we’ve been using so far,

, assumes you’re on the surface of the Earth. That little

, the gravitational constant, is only equal to

In the above equation,

is the gravitational constant (equal to about

are the masses of two objects attracting each other gravitationally, and

is the straight-line distance between the centers of mass of the two objects.

So if that’s the real law of gravity, where did little

, our gravitational acceleration, come from? Remember we said that

applies on the Earth’s surface, and

above applies everywhere. That means that on the Earth’s surface,

is the thing that isn’t the Earth (like you, or a ball, or whatever you’re talking about sitting on the Earth) the other

must be the Earth. So that means:

is the gravitational potential energy between any two objects where one of them isn’t sitting on the surface of the Earth (or very close to it), at least not at every point in the problem.

Why the negative sign? It’s simply how we define it. Let’s look at how

would play into a conservation of energy equation for an object in space falling to the surface of the Earth.

It works out just like we saw for normal conservation of energy for a falling object – as it gets closer to the Earth, it moves faster.

But not everything falls to Earth. We have thousands of satellites, man-made and otherwise (like the Moon) in stable orbits around the Earth. How does that work? It turns out that every distance away from the Earth has associated with it a particular velocity called the orbital velocity. If you move at that velocity, you can continually circle the Earth at a constant distance without ever falling into the Earth. Imagine it like a marble in a bowl. If you swing the bowl around at a certain velocity, the marble will make a circle around the top part of the bowl and won’t fall in. It’s the same general idea.

(in seconds) of the orbit is how long it takes to make a full circular orbit of the Earth at a particular distance.

Astrologers, who attempt to predict the future based on the positions of celestial objects such as planets and stars, claim that the positions of the objects relative to you determine the course of your life.

Find the gravitational force of the planet Jupiter (

) on you, a 60 kg person on Earth, when Jupiter is at its closest approach to Earth (391 million miles).

Find the gravitational force of a passing bus (

lbs) passing by you on the street at a distance of 1 meter.

Make a case for why astrologers are or are not correct based on your above calculations.

can no longer be used to calculate your potential energy relative to the surface? Assume

. The mass of the Earth is

You, an almighty being of some sort, drop a planet next to a star with the intention of putting it in orbit around the star. However, you forget to give it some initial velocity perpendicular to the star, so the planet, gravitationally attracted to the star, begins moving in a straight line towards the star. A few hours later, you notice your mistake when the star is halfway between its initial location and the star and now rapidly approaching the star. How fast is the planet moving at this point?

Should you use kinematics to figure this out? Why or why not?

How can you solve this problem if you don’t use kinematics?

from the star of mass

You have been exploring the Martian moon of Deimos (

kg) and are preparing to leave. At what minimum velocity do you need to leave the surface to escape the gravity of Deimos? Assume Deimos is spherical (it’s not) with a radius of 6,200 m (it’s small!) and your spaceship has a mass of 12,000 kg.

SpaceX has hired you as a consultant to help launch its Dragon capsule (at a weight of 9,259 lbs) into orbit to reach the International Space Station (ISS). The ISS orbits above the Earth at a distance of 249 miles above the surface. You want to launch the Dragon so that it comes to a stop due to the gravitational pull of the Earth just as it reaches the ISS. What initial velocity do you need to give the Dragon capsule at lift-off (assuming the rockets do nothing after you leave the ground)? Hint: you’re smart enough to launch the satellite to where the ISS will be when it reaches the rendezvous point, so it can move in a straight line instead of a curved path.

What orbital velocity must the ISS attain in order to stay in a circular orbit above the Earth at a constant distance (249 miles) above the surface? The ISS has a mass of 925,000 lbs.

You are reading a magazine about pulsars. A few years ago, a satellite in orbit around the Earth detected x-rays coming from sources in outer space. The x-rays detected from one source, called Cygnus X-3, had an intensity which changed over a period of 4.8 hours. This type of astronomical object emitting periodic signals is called a pulsar. One popular theory holds that the pulsar is a normal star (similar to our Sun) which is in orbit around a much more massive neutron star. The period of the x-ray signal is then the period of the orbit. In this theory, the distance between the normal star and the neutron star is approximately the same as the distance between the Earth and the Sun. You realize that if this theory is correct, you can determine how much more massive the neutron star is than our Sun.  Perform this calculation if the Earth has an average distance from the Sun of 93 million miles and our Sun has a mass of

What is the net gravitational force (magnitude and direction) on the satellite of mass 2,000 kg (round circle below)? 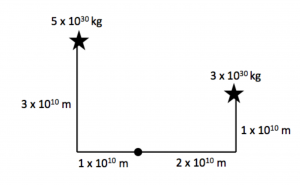