Link to Section 2.1 of the textbook

A is something you can measure. You have 45 bananas, or it’s 72 degrees in the room, or your tire has 3 holes in it. These are all scalar quantities. Common examples of scalars we will see in this class are distance, speed, temperature, energy, and length. Scalars can be positive or negative, but we’ll usually just see the positive aspect of them in class.

A has both term for how much you have of something (called a ) and a (where you’re going). Common examples of vectors we’ll see in this class are displacement, velocity, acceleration, and forces.

Vectors are represented by either a line over a variable,

, or a line under a variable,

. In physics, we use the notation

for vectors, except where the format doesn’t support that option, in which case we’ll use a bold value.

The of a vector is found by removing the directional component. A magnitude is always a positive value. The following notation means to take the magnitude of the vector:

. Note that a vector without direction is simply a scalar value

Link to Section 2.3 of the textbook

Vectors are drawn as a line with an arrow on one end indicating the direction in which the vector is traveling.  The length of the line represents the magnitude of the vector.

On the left side of the left figure, the sum

is shown. On the right side of the figure, the sum

is shown. Are the vectors

the same on both sides?
Yes! Both have the same magnitude and direction, despite the fact that one is offset from the other. They are the same vector. Vector addition is commutative — you can rearrange the order in which you add (and subtract) vectors and you’ll still get the same vector out of your equation, every time.

The easiest way to subtract vectors graphically is to realize that

is the same thing as adding a negative

Link to Section 2.2 of the textbook

Any vector can be written as the sum of two vectors in any given coordinate system. 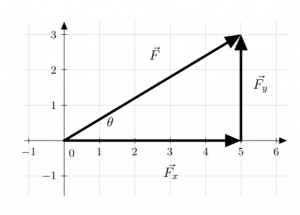 In the figure on the right, the vector

can be described as the sum of the vectors

. Why would we do this? We are breaking up the vector

into its in the

-axis. We can describe a vector pointing in any two dimensional direction using the

coordinate system in this manner.

We can now write

in the figure above is given by sin(

. The Cosine of an angle is given by the Adjacent side to the angle divided by the Hypotenuse. The cosine of

is given by cos(

(CAH). The Tangent of the angle

is found by dividing the Opposite side by the Adjacent side, tan(

Note that the system above depends on which angle you call

. Every time you try to solve a vector graphically in this manner, you must draw a picture and indicate which angle is which.

By rearranging the above equations, we can come to the conclusion that

). Now we can write the vector

as the sum of its component vectors expressed as functions of 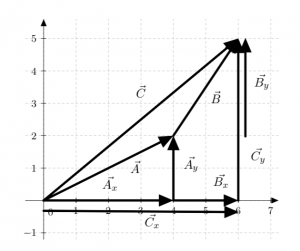 have been broken into their components, where

have been slightly offset from their positions for clarity.

, we can also write this as

and we can conclude that

What does this mean? Look at the figure above. The

is made up of the sum of the

. The same is true for the

. Does this also mean that

? In other words, can you add the magnitudes of the vectors and come up with the same result as if you added the vectors themselves? The answer is no. Adding the vectors means adding

, both of which include directional information. In terms of a path to take, adding the vectors is the equivalent of going from the origin to the tip of the

arrow directly. Adding only the magnitudes adds the numbers with no directional information included. In terms of a path, adding the magnitudes only is equivalent to going from the origin to the tip of

, the continuing from there to the tip of

. Is this the same path? No, the second path was longer. In fact, the only case where adding the vectors is equivalent to adding the magnitudes is the case in which all vectors are pointing in the same direction. So we have concluded that

When adding vectors, you must add their

components separately. You cannot directly add two numbers that point in different directions and expect to get an answer that makes sense.

Link to Section 2.2 of the textbook

), is a vector with some direction and a magnitude of 1. The job of a unit vector is simply to point in some direction. What we’ll normally use it for is pointing in either the

directions, along the axes of our coordinate system. As we’ve already seen, any vector that can be drawn in the

coordinate system can be reduced to two vectors, one pointing along

and one pointing along

. Why are we breaking up our vectors in this manner? Because if we want to do math with vectors, we can only add/subtract vectors pointing in the same direction.

are the most convenient directions for us to use.

means you’re pointing in the

We can use our unit vectors to re-write our normal definition of a vector with components,

is the magnitude of

is the magnitude of

. As long as we’re using the unit vectors, we only need the magnitudes of the components. The unit vector tells us the direction.

Link to Section 2.3 of the textbook

We’ve already seen how to add vectors graphically. What about adding them numerically? Let’s say we were given two vectors to add, 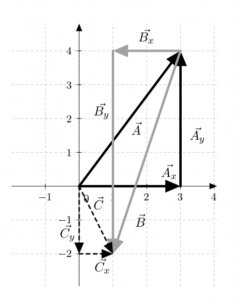 In the figure on the right, we show the graphical addition of

. We begin by placing

(solid black lines) at the origin, going over 3 units to the right (3

). Starting from the tip of

(dotted black lines) points from the beginning of

at the origin to the tip of

Based on this graphical picture, we would expect the vector sum

to correspond to 1 unit to the left and 2 units down (from the tail of the first vector to the head of the last vector), or

. How can we find this numerically?

To add vectors mathematically, we add the

, so we know that

= -6. Using a previous equation, we see that

Now we know the

components of our resulting vector

. What if we wanted to know the length (magnitude) of

? This is the same thing as finding the hypotenuse of a triangle made up of sides

) to find the length of the third side. This is also called finding the magnitude of

(it does not supply us with the direction). To find the \emph{magnitude} of a vector,

So we see that in this case,

. This is the length of

in the figure on the previous page.

Now that we’ve found the magnitude of

, how do we find the direction? The direction is given by the angle from a particular direction. The angle can be found using any of our trig functions now that we know the values of all three sides of the triangle. Working with only

is the angle between

axis. That means that

degrees towards the east direction (positive

axis). Ignore any negative signs when calculating the angles and instead indicate direction by using the angle (in the 0

range) and the cardinal directions north, east, south, and west.

using the vectors given in the previous example.

2.1  Given the two vectors on the left, which of the three graphical additions on the right are equal to

2.2  Could you change the equation to make another graphical addition correct?

2.3  Is there a way to change the equation to get the remaining graphical addition to be the correct answer?

2.5 Calculate the angle between

2.6 Calculate the angle between

. Find the magnitude and directions of

is made up of components

. Find the magnitude and direction of 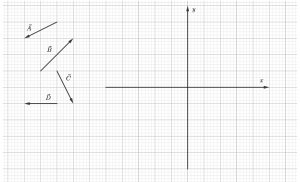 Given the vectors and axes, draw the graphical addition of

you graphed in the previous question in

Calculate the magnitude of the vector

you found in the previous questions.

with the horizontal as shown below. Four students are arguing about the resultant vector obtained by adding these two vectors.

Amanda: “Since these are vectors, we need to use the Pythagorean Theorem to find the magnitude. In this case, the magnitude should be the square root of 128. The direction should be downward.”

Do you agree with Amanda? Why or why not, and on which statements?

Belle: “Since these are vectors, we have to find a direction and a magnitude. We use the vectors to determine the direction, which is down. But to get the magnitude, we just add the individual magnitudes. The magnitude of the resultant vector is sixteen.”

Do you agree with Belle? Why or why not, and on which statements?

Conrad: “I think the direction is actually up. The resultant should add to these vectors to get zero, and since these ones point down, we need another vector pointing up.”

Do you agree with Conrad? Why or why not, and on which statements?

Douglas: “The magnitude will be less than eight. Each of these point down just a little so the resultant will be pretty small.”

Do you agree with Douglas? Why or why not, and on which statements?

How much of something you have. Magnitude can also refer to the absolute value of a vector.

The part of the vector that indicates where the object is going.

Any vector can be broken into components in a given coordinate system. Typically, we break a vector into x and y components.