Link to Chapter 3 of the textbook

is the study of how things move. is how far you have moved along the path you took, and is often given the symbol

means the change in the

is the final position, and

is the initial position. Both distance and displacement are measured in meters (m) when doing most calculations in physics (but always check for the units the question is expecting if it gives them!).

Recall that a  quantity is something that has magnitude only (how much you have) and is always a positive number (a negative indicates direction). A  quantity has both magnitude and direction (how much and where it’s going) and can be positive or negative. Distance is a scalar, and displacement is a vector.

is a scalar quantity indicating how fast something is moving, but does not include information on the direction (always positive). Speed is calculated as distance over time (how far you went divided by how long it took). is a vector including directional information, and is calculated as the displacement over time (the total distance you moved from your initial position divided by how long it took to arrive at the final position).

is calculated as the displacement over a given time period in units of m/s.

is the velocity at some particular instant in time. This is found by taking the limit of the average velocity as the time period goes to zero, which is the derivative of the expression for the position

as a function of the time

graphs, chart the position of an object on the vertical axis as a function of time on the horizontal axis. Caution: these are not maps of motion! Moving in the horizontal direction across the graphs is increasing in time, not position.

At every point on an

graph, a line can be drawn tangent to the point (a straight line that just touches but does not intersect the curve at that point). The slope of this tangent line is equal to the velocity. Why is this? Consider taking the slope of this line by picking two random points on the line with coordinates

(because our vertical axis is

position and our horizontal axis is

position), which we have defined as our average velocity.

What happens as we choose these points closer and closer together? The value of

will approach zero, effectively taking the limit as we go to zero. Assuming the two points are right on top of each other (

= 0) we find the instantaneous velocity,

So what does the horizontal axis mean? When the curve is above the axis, the

value of the position of the object at that time is positive. When the curve is below the axis, the

can be calculated as

in units of m/s/s, also called m/s2. Note the subscripts on the velocities in the previous equation; we’re only working in one dimension for now, but we’ll move into multiple dimensions in the next chapter so let’s keep our

Section 3.4: Acceleration and the Kinematics Equations

The (acceleration at some particular instant in time, not over a range of times) is calculated as the limit of the change in velocity as the time interval approaches zero, or the derivative of the velocity with respect to time.

The velocity was equal to the slope of the

graph, and the acceleration is equal to the slope of the

We will only be dealing with cases of constant acceleration in this chapter. That means the acceleration is either positive, negative, or zero, but the

graph will always have a slope of zero (horizontal lines). Transitions from one value of the acceleration to another are said to happen instantaneously (although we know this is not the case physically, it certainly simples the problem, and is a very good approximation for something falling in a gravitational field).

There are three equations relate position, velocity, and acceleration with time. These three equations are derived from each other; any two will give the same result as the third, so your answers should always agree no matter which equation(s) you choose to use.

Think about the question. What are you being asked to find? How can you go about this?

Pick a zero point and positive

Write down what you know and what you’re looking for.

Write down the three kinematics equations.

Pick an equation that has what you have and what you’re looking for, but no terms you don’t have or need.

Solve for the answer.

Check to see if your answer makes sense.

You can always avoid the quadratic equation by using the other two equations instead of the one that leads to a quadratic.

You walk in a straight line 300 m north, and the turn around and walk 470 m south. Draw a picture and label the north direction as positive.

What was the total distance you walked?

What was your total displacement?

What is the magnitude of your displacement?

What distance did he walk?

What was his displacement?

Janet runs around a circular track with a diameter of 0.50 km. If she does a total of four laps around the track in 1.5 hours,

what was her average speed in m/s?

What was her average velocity in m/s?

= 1 m. He walks south for two seconds and ends up at

= -2 m. Then he walks north at 1 m/s for three seconds, stands still for a second, and walks to

= 0, arriving 2 seconds later. Draw his motion on the 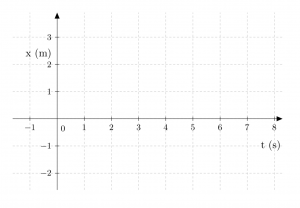 Label each line segment with a short description of Emily’s motion at that time. 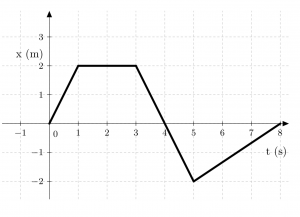 What was Emily’s average velocity between

What was Emily’s instantaneous velocity at

graph for Emily’s instantaneous velocity as a function of time on the graph below. 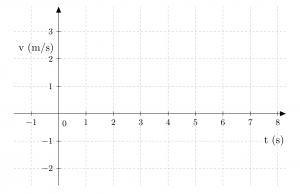 ) would you find Herbert at

Derive an equation for Herbert’s instantaneous velocity as a function of time,

How fast is Herbert moving after 11 s?

What is Herbert’s acceleration as a function of time,

What is Herbert’s instantaneous acceleration at

A plane starts from rest and has reached a velocity of 85 m/s after 19 seconds. What was its acceleration?

A rock falls off a cliff 85.0 m above the ground. Assume the acceleration due to gravity is -9.8 m/s

How fast is the rock moving three seconds later?

How fast is the rock moving just before it hits the ground?

How long does it take the rock to hit the ground?

Beth is playing with her remote controlled car. At time

= 3 m, leaves it there for two seconds, drives it in the negative direction at -2 m/s until it reaches

Draw the motion of the car on the axes below. 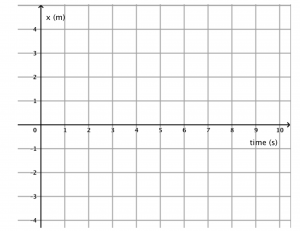 What was the average velocity of the car between

What was the average velocity of the car between

What was the instantaneous velocity of the car at

What was the instantaneous velocity of the car at

The position of an object is given by the equation

Where is this object located at

Derive the equation for the velocity of the object as a function of time.

What is the velocity of the object at

Derive an equation for the acceleration of the object as a function of time.

What is the acceleration of the object at

A concussion is a traumatic brain injury caused by a rapid acceleration of the skull, causing the brain to hit the inside of the skull and damage the soft tissue of the brain. Concussions are thought to become severe around 90

‘s of acceleration (where 1

Infants are especially prone to concussions. Suppose a young child is left momentarily unattended on a bed. The child may roll off the bed and fall onto the floor. Two common types of floor coverings are carpet and hardwood. A typical carpet can be compressed by 2.5 cm. Hardwood floor, on the other hand, can only be compressed around 1.5 mm. Let’s say a child falls off the edge of a bed, 3 feet above the floor. Assume the initial velocity of the child is 0 m/s. Will the child suffer a concussion on a carpeted floor? What about a hardwood floor?

For a class project, your roommate builds a small rocket and launches it from the soccer field. The rocket has an initial velocity of zero, and begins to head straight upwards when its boosters fire. The boosters give the rocket an upwards acceleration of 6 m/s

for the first 5 seconds, then cut out. How high does the rocket go, and how long does it take it to hit the ground after it launches?

In your new job, you are the technical advisor for the writers of a gangster movie about Bonnie and Clyde. In one scene Bonnie and Clyde try to flee from one state to another. (If they got across the state line, they could evade capture, at least for a while until they became Federal fugitives.) In the script, Bonnie is driving down the highway at 108 km/hour, and passes a concealed police car that is 1 kilometer from the state line. The instant Bonnie and Clyde pass the patrol car, the cop pulls onto the highway and accelerates at a constant rate of 2 m/s

. The writers want to know if they make it across the state line before the pursuing cop catches up with them.

A bullet is fired through a piece of ballistic gel 8.00 inches long so that the bullet passes through the gel in a straight line along the dotted path below. The dotted path is at an angle of 41

to the solid horizontal line. If the bullet had an initial speed of 5.00

m/s and leaves the cardboard with a velocity of 4.00

Find the total time the bullet is in contact with the gel. 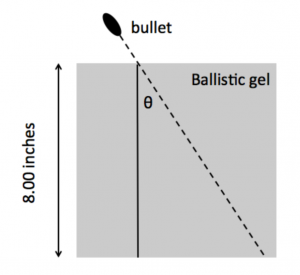 The study of how things move. We will often refer to the 'kinematics equations', three equations that relate displacement, velocity, and acceleration in a straight line.

How far you went along the particular path you took. Scalar with units of length (m).

The straight-line distance between your final and initial positions. Vector, units of length (m).

How fast you moved along the path you took. Calculated as distance / time. Scalar, units of m/s.

How fast you moved. Calculated as displacement / time, in units of m/s. Vector.

Velocity calculated as the displacement over some amount of time. Vector, units of m/s.

Velocity calculated as displacement over time, where the amount of time goes to zero. The slope of an x-t graph at some given time, and the derivative of x(t).

The change in velocity over time. Vector, units of m/s^2.

Velocity divided by a non-zero length of time. Vector, units of m/s^2.

Velocity over time as time goes to zero. Also the slope of a v-t graph and the time derivative of the velocity.